Welp, I guess it's time for Tefiren Does Mafia 2!


elyvorg said:
Name: Tefiren
Species: Archopy (prehistoric alternate Grovyle evolution: see my avatar, or alternatively, here's specifically Tefiren himself)
Gender: Male
Personality: Born into a world in which a complete genocide of his species is being gradually, inexorably carried out, Tefiren lives in perpetual terror of his looming inevitable death. Or, at least, he would, had he not subconsciously twisted everything around and turned constantly running and hiding from his would-be murderers into a fun and exciting game that he is definitely always going to win. This all-encompassing coping mechanism of his also involves blocking out the part of him that cares when anyone else is killed so that he doesn't have to think about that happening to him one day, making his tact and people skills rather... not great.

(Although, for the sake of flavour, it might be fun if this takes place during the period after he's met and started living with Forsira, who is definitely just a fellow player who makes this game more varied and challenging for him and not at all someone he's attached to or cares about or would be remotely sad over if she were to, I dunno, go missing or anything.)

Also, he's from prehistoric times, so he's not going to have any idea what a human is, or any Pokémon species that isn't native to his home. Not that he will care - he is absolutely going to be thinking of this as basically just an extension of the "game" he plays in his regular life, and players of the game are just players of the game.

Here's the fic he's from, if anyone is interested, especially since it's from ages ago and only Dragonfree and I think maybe Negrek (?) have read it.

Man, it has been A While(TM) since I've written Tefiren or thought about him a lot at all, so I may be a bit rusty, but this should be fun.
Click to expand...

Gonna jump in with my character, Wes!

Appearance: Wes is slightly tall at 5’11”. He has platinum blonde/silver hair and golden eyes, tan skin, has a lean build like that of a runner or swimmer. He has a white tattoo that goes all the way across the bridge of his nose—he got it as a teen to cover up an old, ugly scar. He is a Pokémon Trainer and a Snagger, and is quite gifted at both.

Personality: Wes makes up for his talents with training and snagging by having almost zero social skills. He prefers to keep to himself, hates social gatherings, is easily annoyed by others, and strictly adheres to the “every man for himself” mindset—yet he somehow, mysteriously finds himself going out of his way for those he cares about. How strange!
He is fond of Pokémon and firmly believes they are far better than people. He would do anything for his own Pokémon, who he considers to be his family. 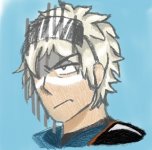 Desperate to escape Orre, and ex-criminal named Wes tries to leave the desert and his past behind for good—until he gets caught in a war raging from the shadows and finds himself fighting to save the very region he was trying to forsake.​

Name: Rascal
Species: Tyrunt
Age: *Angry roaring sounds*
Gender: Female
Personality: Aggressive, stubborn,and raring for a good fight, Rascal does things her way. Get on her level or get lost. Earning respect or decency from her is unlikely. She's fight first, forget to ask questions later.
Remember kids, violence isn't the answer, its the solution.
Appearance: Your average Tyrunt

(Rascal comes from my journeyfic, Legendary Adventures)
What happens when a single determined Zubat disrupts a budding trainer's dreams of glory?

Staff
Sign-ups are now closed! In the end it looks like we have 19 players, which is plenty to get a good game going. This year I'm trying something a little different by opening the game thread early for a special "day zero" pre-game phase to allow people to chat and roleplay before the game proper starts. This will give you something to do while waiting for the game proper to begin, and will also ensure that people who die early on in the game have at least a little bit of time to enjoy RPing with their character! Please note that this phase is completely optional and has no bearing on the actual game at all--don't try to infer anything about people's roles based on what they say during this time, since absolutely no one knows what the roles will be yet (including me)! If that sounds fun, head over to the main thread for some casual pre-game RP. If not, sit tight while I finalize the game setup.

At this point I'm hoping to start the game proper at midnight (UTC) on May 3rd, but it will depend how fast I'm able to get all the roles drawn up. I'll announce the official start time at least twenty-four hours in advance, one way or another. More information about the game setup will be made available at that time.

Thanks for joining, everyone! I'm looking forward to another good game this year.

Name: Zoroark (as Braixen)
Species: Zoroark
Age: Early adulthood (20s in human years)
Gender: Male
Personality: Gruff, reserved, and quiet. He's gotten by in life under the blanket of a constant illusion, and that meant speaking when spoken to and avoiding the spotlight. He's squeamish at the idea of doing anything that would affect others badly, but if push comes to shove he'll do whatever it takes to get by without another thought.
Appearance: A lavender-colored (shiny) braixen. Details and features might vary or look off depending on when/how you look at him. Has a strange shadow.
From: Do Psychic-Type Pokemon Dream of Electric Sheep? (though as of this writing, he's only appeared minimally.)
Resident nosy person!​
Stuff I've published:
Psychic Types; Electric Sheep: The tale of a posse of children, a misfit band of cartographers, a wayward zoroark, a scorned pair of researchers, and all the reasons they couldn't save the world alone.
Pocket Monsters: A child on a quest and his pocket monsters get all mixed up with the mafia

Stuff I want to publish:
Fallen Star: When a mercenary exhibits control of an ancient power he shouldn't possess, it attracts the attention of all the wrong pokemon.
Braixen Story: A quest across the continent to get medical supplies for an ailing townsmon goes horribly wrong.
Ocean's Descent: A lapras convicted of a crime she didn't commit flees to sanctuary at the bottom of the ocean before a deadly predator can come for her head.
Lullaby of The Spider: What if you could have everything you ever wanted?
Not Really Pirates: the son of a rich merchant absconds with a band of ragtag pirates to find an ancient treasure before a shady navy admiral can reach it first.
Between Worlds: She beat the game. She won. She found a way back. She just wished she didn't have to choose a world to stay in.
You must log in or register to reply here.
Share:
Email Share Link
Top Bottom