Staff
It's that time of year again! We have the starters and box legendaries spoiled now and are starting to get some gameplay spoilers, so... what are people's impressions of the games thus far?

I've been pretty excited about the stuff revealed so far. Like the designs, happy about the mons-on-overworld wild battles, and feeling better about the dynamax mechanic. When reading the news recap I started at, "They went from 'your pokémon evolves into an over-the-top new form' to 'your pokémon uses an over-the-top new attack' to 'your pokémon gets really big for a bit?' Really?" Actually seeing it in the video made it seem a little cooler in actual use, though, and the gym shot with the monster-sized grookey just whaling away was so ridiculous that I kind of have to love it. I'll see how it goes.

I am also amused that the edgelord crows are taxis.

Why must the Rotom-dex return, though? They killed the Dexnav after a single game but go and bring that thing back for an encore? Ugh. I imagine it will be a very different implementation, but considering all the wonderful features they've dropped between generations, to see that of all of them getting brought back for another go-round is annoying. I wonder if it was super popular in Japan or something.

It looks like HMs are gone for good, and I couldn't be happier.

Also I am 100% here for Pokemon kaiju battles, and I want to catch a Natu or a Joltik just to make them super-sized.

Staff
Wait, what indicated that HMs are gone for good? 100% in favor, but I missed that news somehow!

Super-sized joltik... would be the size of a watermelon, maybe? XD I assume the games will display all the dynamaxes at similar sizes, but I'm amused by imagining the system if it was a constant multiplier on the pokémon's size. 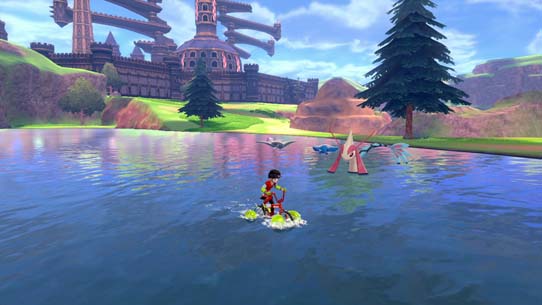 They mention that the Rotom Phone can be used to help you cross water!

That said, I suppose all that technically confirms is that Surf isn't necessary, but if they got rid of the only good HM and none of the rest, I'm going to be a little upset!

Staff
Ohh, yeah, of course! I kind of like the idea of using your pokémon to interact with the environment and overcome obstacles, but not the way it was implemented with HM's, so yeah, hopefully they've all been nixed.

It's looking pretty promising so far. I also get the feeling HMs are gone, with the water transport and raven-taxi service. I quite liked the RotomDex in Gen 7, so I'm not disappointed to see it back. It would be nice if they brought back the more demanded gimmicks though like pokemon following you. I thought Let's Go might have been the start of that returning as a staple but alas.

Glad to see wild pokemon in the overworld again. I'm not sure how much of a constant that will be in the game, like if it's only a specific area or something? But we'll see. I've heard people mention the Wild Area as being one specific place, whereas somewhere else mentioned it replaces the routes between towns. I'd like to know more about that.

As for Dynamax? Eh... I'll give it a go. I'm not hyped for that. I think I was clinging onto the 'armored pokemon' rumor too much, so oversized pokemon just doesn't do it for me XD the online multiplayer elements sound pretty epic though (and I doubt I'll be arguing to Dynamax my pokemon during it, so that one-person limit doesn't bother me at all!)
Your Friendly Christian Mad-Brit Cyberpunk Nutter, who really really likes tea. A lot.

I was so, so ridiculously sad that the first SwSh trailer showed a return to random encounters. Then seeing the first glimpse of the Wild Area I was like "no, don't play with my heart like this, don't show mons in the overworld when I already know this isn't how the actual gameplay will be." ;-; But then. Then it was. I literally cried tears of joy.
Writer of that one 18-year-old trainerfic in which a bunch of kids fight Team Rocket, get PTSD, and argue with Legendaries.
I'm always up for a review exchange! Just shoot me a message here or on Discord.

same. i already loved this about let's go!, but it looks so good in this game. has anyone mentioned how nice the lighting is? the lighting is so nice.

i honestly did not like xy or sun/moon, and didn't really get excited about either of them leading up to their release... it's been a long time since i've genuinely anticipated a pokémon game. almost ten years? but man, these trailers have me really optimistic. i'd like to temper my expectations here, but it just feels so fresh and inspired in a way that wasn't gimmicky and forced, which is how i felt about the attempt to shake the franchise up with sun/moon, at least. the pokémon really feel like pokémon to me in a way the sun/moon ones didn't, and even barring the authentic feeling of them, i'm obsessed with the designs. all the starters are good?? you can ride a raven knight??? wooloo is so unreasonably perfect???????? i'm a bit of an anglophile, so maybe this is just pushing all the right buttons for me specifically, but man, i am properly excited for this game.

that said, not too sure how to feel about some of the new mechanics, honestly. dynamaxing is... okay, i don't hate it, but i am disappointed that pokémon seems to be establishing a trend of introducing some Major New Mechanic only to drop it immediately. i really liked mega evolution and i'm going to be pretty sad/frustrated if it doesn't make a return again. regional variants were cool too! i'm really hoping we get some of those. i read a leak that suggested that there'll be a special form of dynamaxing called gigantamaxing that will change the physical appearance of the affected pokémon, which would be cool, i guess, and maybe a bit more balanced than mega evolution while still preserving the central idea.

anyway, overall, good feelings about this. whether those stick around still remains to be seen, but i'm hopeful.

wandersword - a fic about kings, steel, flesh, sweat, onions, and the dead.​
You must log in or register to reply here.
Share:
Email Link
Top