Okay, so, regardless of all the reasons my clowning on D4 wasn't just solely my fault, it's a relief to know that it didn't actually decide the game, because we'd already lost. Even if DW had been active and able to vote, and all five townies had voted Mewtwo, it'd have been a tie, and then in the night, a townie would be killed and we'd lose. Or maybe if we got very lucky, a doctor would block the kill, and we'd repeat the same tied vote until that didn't happen. Our only chance was to have our town doctors manage to overdose a mafia (difficult when the mafia could roleblock one of them), or to somehow activate Fusion's secret vigkill power without him being killed first (also very difficult when the mafia knew how his power activated), but those were both extremely, extremely unlikely scenarios. All five mafia could have literally confessed to being mafia on Day 4 and there'd have been nothing we could have done. We were screwed from the very beginning of that day.

Also, I stand by the fact that my big logicpost was the best post I made that game, even if everything I did after it was a disaster. I was very proud of that post, dammit (so of course I'd be naturally inclined to gravitate towards trusting the one person who directly engaged with the post and seemed to appreciate it, whoops).

Anyway, putting me and my own mistakes aside, what this whole thing was within the RP narrative was Tefiren's spectacular powers of denial in action. He felt very trapped and all-but-doomed on the first half of that day, and that's something he's simply not capable of accepting. It is extremely Tefiren to latch onto the only scenario in which there's still a chance of winning and take that as the definite truth, ignoring all evidence to the contrary and convincing himself that victory is not only possible but easy and certain. (Playing this while so deep in Tefiren's head probably influenced my own thoughts on this a bit, too.)

So, that last RP post I made in the game before checking out? At the time I meant it rather differently, but since what it really was was Tefiren looking at all four of the actual mafia, we can imagine that those "looks" were in fact looks of subtle murderous intent in response to him playing into their hands. In that case, that post was actually Tefiren realising on some subconscious level that he was doomed after all and effectively giving up, running to huddle in his tree with Miyako's staff to wait for the end to come. He'd never give up on his own "game" for any reason, but he'd realised in the previous mafia game that nobody actually dies in mafia-land, so in a sense this was him having finally accepted that he never wanted to be here and he doesn't even really like this game and he just wants to go home and be with Forsira (despite what else that means for him). Winning his first game didn't get him back home; maybe the real way out all along was to lose.

...And Tefiren really has gone home now, because after the immense emotional upset this game put me through, I'm not doing this again. Turns out mafia is not nearly as much the game for me as I thought it was, for more than one reason.

I still had a lot of fun playing, though, and I appreciate everyone's concern and kind words on the Discord back when I was having messy self-deprecating emotions all over the place. That's why this wrap-up post took me so long to get around to. I'm more or less okay now, don't worry.

And I'll definitely be spectating future games! I can still get most of the fun parts of mafia just from watching and trying to figure stuff out on my own, without any of the pressure and stress that comes from participating and having it really matter if my theories turn out to be wrong. And, geez, I can't even imagine how much more stressful it'd be to be mafia and have to constantly lie and worry about being found out. I'm honestly pretty relieved that I'm never going to learn what that's like.

As much as I feel this game's setup was weighted a bit too hard in the mafia's favour, I do want to extend congratulations to the mafia members for genuinely doing a pretty good job of hiding regardless. Particularly to @Equitial , for getting me to townread you so hard on the earlier days that I wasn't convinced Dave's shade was necessarily anything more than circumstantial. And also props to @HelloYellow17 , for holding out really well as a first-timer going through some pretty tough situations and coming into your own at the end, even as I mostly did nothing but make it harder on you despite being on the same side. Again, I am sorry for the way I acted towards you near the end there, and I'm glad there are no hard feelings. I'll be rooting for you in any future games you might play!

I think I mentioned at some point during Day 4 that I was saving some Tefiren-Miyako RP I'd prewritten that never got to happen, with the intent of showing it in the postgame. Most of the content of it got repurposed one way or another into actual RP posts that happened that day, but regardless, here is the original version as it would have been posted if Miyako had lived. (@Seren !)


Tefiren slunk out of his tree and approached the Human with the stick, not quite looking at her.

"Maybe you were right," he muttered to her without introduction. "Two days ago, when we were trying to guess what happened to the Tyrunt and the fun Human. You said those marks in the ground looked like, like those 'psychic mark' things everyone said the Arsonist uses. Maybe I..." He glanced at her for a moment, and then back at the ground. "Maybe you had a point."

It wasn't his fault, not really; he had no idea what this word, 'psychic', even meant or looked like. For all he knew, those ripples could just have been from a totally normal fight. (But this Human had known better than him. He should have trusted her.)

"And the ones who get caught by the Mafia, or, or healed too hard - they just vanish. That's what happened yesterday morning, to the tall fiery fox and the half-zolt. So of course they wouldn't leave marks, even if any of them had fought back.

"So!" Tefiren said, beginning to get just a little more animated, pacing around in front of the Human. Perhaps the rest of the group could also hear him from here, but he didn't really care whether they did or not. "The Arsonist went for the fun Human, like you said back then! They must have been afraid of him, and also been a stupid Arsonist who didn't know the best way to use their trick. It's stupid, but it's not unlikely. It makes sense. And then the Tyrunt... the Mafia got her."

He thought back to the way he'd assumed the marks had been left from a fight; he'd accepted it back then because that Tyrunt had seemed like the type to enjoy battling - not just battling, fighting. She was the type to fight her enemies, not to run away. (She was insane.)

"But they wouldn't have gone for the Tyrunt on purpose," he added. "She wasn't important. So maybe, maybe the Tyrunt was protecting someone more important - except it couldn't have been the fun Human, because of the swap, so someone else - and she let herself get caught instead of them so that they could... they could... stay here."

His voice trailed off towards the end as the thought of what the Tyrunt had done sunk in. Protecting someone else, to the point of deliberately letting yourself get caught killed instead, just so that the other person could go free. Ridiculous. Nonsensical. Utterly backwards. Anyone who played the game like that was just asking to lose.

There was no way Tefiren would ever do anything that stupid. Never.

He shook his leaves down and looked back at the Human, his eyes brightening. "Anyway!" he went on. "What this means is that the Mafia knew! They knew they tried to catch someone who wasn't the fun Human or the Tyrunt! They must have been so confused when they saw who'd actually been caught in the morning!" He giggled, just a little. "So maybe, when we were all trying to guess what had happened, some of the Mafia might have let slip hints that they knew. They knew they didn't try to catch the fun Human. See? See? It's just like my guessing game!

"And!" he added, "maybe it's the same with the thunder cat! The Mafia would have known it wasn't her all along. So even though everything I said yesterday, all of my figuring it out, it all made perfect sense--" he glared around at the empty expanse of white for a moment "--it probably made less sense to the Mafia, because they would have been thinking about what they knew actually happened instead!"

...And then I was going to do some analysis of people's initial theories about the N1 deaths and people's reasoning for voting Chappie. I still have that analysis typed up in my notes, but I don't feel like there's any point sharing it at this point - especially considering I was still making a wrong assumption about the N1 deaths and it turns out the mafia really did go for Lexx, meaning any conclusions I came to from that half of the analysis would have been right-for-the-wrong-reasons. The short of it all is that this stuff led to me side-eyeing Alexander, Kyros and slightly Altair just a bit more overnight... and then I just never followed up on any of that on Day 4 because Miyako's death and the big push on Mewtwo in particular dragged my thoughts off into a completely different direction. ]]
Lastly but most importantly, I drew some friends. :3

what, no, friends, what are you talking about, Tefiren would never do anything as ridiculous and foolish as getting attached to someone 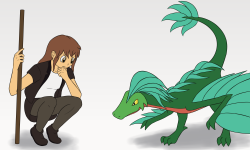 (This is, of course, the part where Tefiren is blithely ignoring Miyako's theory about the psychic ripples on one of the N1 kills, which potentially indirectly leads to her death.)

elyvorg said:
Also, I stand by the fact that my big logicpost was the best post I made that game, even if everything I did after it was a disaster. I was very proud of that post, dammit (so of course I'd be naturally inclined to gravitate towards trusting the one person who directly engaged with the post and seemed to appreciate it, whoops).
Click to expand...

I just wanted to chime in and say that the big damn logic post impressed the hell out of me when I read it! My eyes kept widening as each of the "main points" was spot-on, one after another, culminating in Configuration A being entirely correct! And even with Config B being a death sentence, it's like you said--the day was already a foregone conclusion before it started. (Sorry, Tefiren.)

Writer of that one 20-year-old trainerfic in which a bunch of kids fight Team Rocket, get PTSD, and argue with Legendaries.
I'm always up for a review exchange! Just shoot me a message here or on Discord.