Game Week of the Multiverse: Signups

Name: Star
Species: Mew
Appearance: Standard Mew
Personality: A little impish, not one for strict rules. Cheerful, defiant.
Story: Hands of Creation
Secret: Is afraid of being restrained.
Items: A picture of a Zygarde.
Pain: She's probably the more entertaining one to harm.

Name: Arceus (but Star refers to her as Barky)
Species: Arceus
Appearance: Standard Normal-type Arceus.
Personality: Strict, haughty, quite literally "holier than thou." Disciplined, principled.
Story: Hands of Creation
Secret: Will refuse to acknowledge how much he cares for Star.
Items: A small treasure bag containing a Rollcall Orb and a Protect Orb.
Pain: Probably just fine, but will not be as easily emotive about it.

Name: Meggie
Species: Froslass(Human-turned Snorunt, but she evolved)
Appearance: Uh, froslass with a purse and a tiara
Personality: Jovial, kind. Likes to play with friends and go out. Sweet, doesn't enjoy hurting people, but will punch you if needed. Generally a nice person to be around.
Story: LoF
Secret: Once she worked with a human scientist scientist that had no ethics on his job.
Items: Tiara with a Never-Melt-Ice on it, treasure bag and a Escape Orb
Pain: Probably everything that won't burn her to death.

Name: Dusk
Species: Houndoom
Appearance: An ordinary Houndoom with a faded scar on his left hind-leg.
Personality: The polar opposite of the classic Houndoom stereotypes, Dusk is a gentle and kind guy who occasionally jokes that he's the 'anti-Houndoom'. While he will fight if need be, he dislikes combat and will try everything he can to avoid battling. He's a huge lover of exploration and history.
Items: Pit Fang, Joy Ribbon, Vulpix Tag
Pain: Eh, can't be much worse than what happens to him in canon anyway... seriously though, a decent amount of pain is fine, but not too much.

Looks like switching out Spirit is going to work, so here's my new character's stuff, for reference.

Name: Gladion Mohn
Species: Former Human, becoming a Type: Null
Appearance: Standard Type: Null. As a 'genderless' species, it shouldn't be possible to tell his gender without asking. (Save for any psychic stuff, I suppose.)

Personality: Generally cold and cynical when it comes to humans, but softer towards pokemon. Has some unresolved anger issues that he knows he really should work on. Generally not a fan of authority, and sympathetic to those in weaker postitions.

Story: Not yet published.
Secret: If anyone finds out that he and Lillie are twins, he'd really like them to assume they're fraternal twins. This is not actually the case, they're identical twins, with him being a trans man.
Pain: As you please. If you don't hurt him, I'll just do it myself.
Last edited: Feb 14, 2021
Dark-Clothed Small Human
Eleventh Hour​

Well! I suppose I could give it a go because Wynaut? I’ll start with just one to get the hang of it.

Personality: Hotblooded, fearless, combative and very abrasive, but also tender, caring and loyal if you get to know him very well. He tends to be very protective toward younger creatures — human and Pokémon alike — and he is always ready to defend his family and closest acquaintances from threats and hostile characters. It’s very easy for him to grow impatient when people are dilly-dallying and procrastinating.

Story: The Meaning of Power, but he has yet to make his debut there.

Secret: His heart of gold. In Orre he knew people who were quick to prey on the more sensitive and “weaker” members of the community, which is why he keeps his more gentle side carefully under wraps by showing off his more aggressive personality.

Items: His yo-yo, a golden locket with a photo of his family (showing his parents and his two younger siblings), and a horseshoe belonging to his Mudsdale as a lucky charm.

Pain: He is used to all kinds of pain, as he gets himself very frequently in barehanded fights with criminals and thugs. Nothing fazes him anymore.

Gotta go back. Back to the past.

Since Mew is mutemewte and I don't want to step on Namo's toes too much, I'm-a swap them out.

Personality: An absolute dork. Heavy tendency to put his footpaw in his mouth or not think before speaking. On the impulsive side. Tends to come up with crazy plans that can be successful, but will usually blow back in his face.
Story: PMD: Guiding Light
Secret: Had fused with the remnant of Dark Matter before entering the pokémon world.
Items: His Naturia Looplet, which lets him perform Z-Moves, and an Ultra Recon Squad badge.
Pain:

(Banner by @Cresselia92 )
"To see a World in a Grain of Sand / And a Heaven in a Wild Flower,
Hold Infinity in the palm of your hand / And Eternity in an hour."
~William Blake, "Auguries of Innocence"
​ 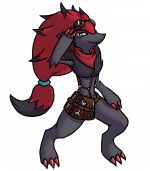 Personality: Extroverted, a bit of a prankster, likes to have fun and meet new people. Is also a lover of machinery,
Story: Same as his brother
Items: Shock gauntlet, treasure bag
Pain: Yes.

Appearance: A tad larger and bulkier than the average Luxray, about up to Kora's shoulder so... around 5 foot when on all fours.

Personality: Laid back and nonchalant. Doesn't take anything seriously. Prefers to nap and rest more than anything, but isn't opposed to fun-having.

Story: Soon to be revealed in Ties of Fate, same as Kora and Lee

Item: None, can't think of one

Secret: Is still torn apart by accidentally abandoning his team on an island of ferals

Pain: As much as possible

Name: Toby
Species: Buizel
Appearance: Visible in fic cover, intense polychromatic blue eyes.
Personality: Playful and jovial, loves to enjoy games with friends, or with a complete stranger, he doesn't care much. However, there will always be that connection that makes things more enjoyable with someone you know.
Story: Change of Heart
Items: Currently none
Pain: Nothing major or that couldn't be healed after a while.

Name: Hearts
Species: Quilava
Appearance:One eye blue as the night sky, one eye golden like the morning sun. The first reflects the light of the world while the second shines like a star on its own. His fur is extremely well groomed, and cared for on most of the surface.
Personality: Jokester and childish, or easygoing and calm, one never knows because his personality flips like a switch from a moment to another. While both sides of him share many traits, they have different ways of showing them.
Story: Change of Heart
Secrets: The actual reasons behind him having two souls.
Items: Silver bracelet with two names carved on its frame, but the metal is so worn out they are unreadable.
Pain: Regular injuries, upper limit is broken bones.

hoooooly crap I'm so late to this

Appearance: regular Garchomp, but he has a Z-shaped branding mark on his chest

Personality: an incredibly cocky bastard with a hero complex. Huge ego, too, but despite all this is actually very nice! May go off on tangents about "the Great Serpent" (aka Zygarde.)

Story: Tail of Time (though he's yet to actually appear in it as of me posting this... I am also working on a oneshot centering around him, so I'll edit this post with that when it is published.)

Secret: shockingly doesn't have any secrets! Unless you count him being ace/pan; he never opened up to anyone about it and believes he's unnatural for it. Oh, also, the fact that he's a Zygarde cultist-- actually the only one in his universe! He actually does host a Zygarde Core within his body, and he does get "intrusive thoughts" from it (think of the Marvel Comics character, Eddie Brock/Venom, and how that dynamic plays out. It's kind of like that.)

Items: none Does a (sentient) Zygarde Core count?

Pain: All of the emotional pain, and so much physical pain.

(Something else that I'm not sure where to put):

He only looks like this when under extreme pressure or in life-threatening danger. During this state, he is partially taken control of by Zygarde, and thus may be more aggressive and chaotic than usual. 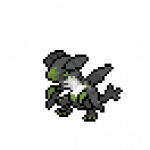 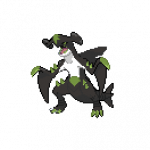 There would be more to this than just a simple recolor (it should be more akin to an actual Garchomp/Zygarde fusion) but I don't have any concrete ideas for that yet.
Last edited: Nov 19, 2021 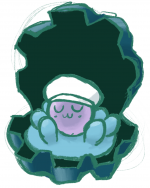 Personality: Calm with an overtone of flamboyant grace and an undertone of dramatic chaos. Very poetic and romantic in speech and manner. Is mostly easy to approach, but he won't tolerate harassment or those who break his moral code. Has an affinity for the sea and a great deal of wisdom.
Story: Facadeverse!Wallace (Post ORAS, Pre ATAC. Relevant fics linked here.)
Secret: Well I'm not gonna reveal it here
Items: Aside from their beret, they have a string of coral and turquoise worry beads (not very useful if you have no hands lol), a singular blue pencil they were holding when they were whisked away, and a picture of their niece like they're the solider who's going to die.
Pain: Throw your worst. Except death. I still need to finish ATAC.
- - -
Name: Winona Kimura
Species: Human turned Swellow
Appearance: 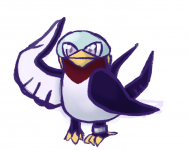 Personality: Imaginative, head-in-the-clouds sort of person. Cares deeply for her friends, her loved ones, and the natural world. Pushes herself to be the best she can be and loves nothing more than friendly sparring. Over the moon at the fact that she can fly now. First engagement and now flight? She's never been happier. She's very calm, even under pressure, though she can sometimes snap when she feels her abilities are mocked. being
Story: Facadeverse!Winona (Post ORAS, Pre ATAC. Relevant fics linked here.)
Secret: Gonna have to find that one out
Items: Aside from her flight helmet, she has her Pokénav Plus, her engagement ring, and a small, dried lavender flower
Pain: Same with Wallace. Put her through hell, but keep her alive for I can write more Winona-centric fics.
https://piportorchic.carrd.co/
Oneshots:
Hell Eternal [a Malva One Shot] You Wouldn't Steal a Car [but Volkner would] The Twins [a Tate and Liza One Shot] I Love You; I Do, I Do, I Do, I Do, I Do [A Gracefulshipping One Shot] A Night in Kanto [a FemmeGymShipping One Shot] Giovanni, At Last, We See Each Other Plain Demons have wings, but so do angels You were only waiting for this moment to be free 風雨 (Wind and Rain)
Longer fics:
Pokémon: Heroes and Villains (Ongoing) In the echo of the ocean/In the hunting of the wind (Complete) But How Will It Be: A Drabble Collection (Complete) Alternate Title (Alternate Champion) (Ongoing) I'm A Marionette (Ongoing)
always open for a review exchange!
You must log in or register to reply here.
Share:
Email Share Link
Top Bottom